Austin Oktoberfest German-Texan Style | Kids Out and About Austin 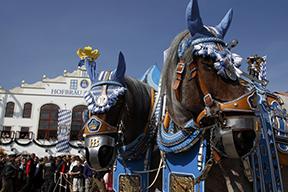 Grab your Lederhosen and Dirndl, it’s Oktoberfest 2022. The most famous German celebration has been happening since 1812. It is so über that it has its own special brew - Oktoberfest beer. And GTHS ensures Austin gets to share in this celebration. According to the Austin Chronicle, “the German-Texan Heritage Society certainly brings the most authentic Oktoberfest game in town”.
Click here for more information about this activity
Please help us keep this calendar up to date! If this activity is sold out, canceled, or otherwise needs alteration, email mindy@kidsoutandabout.com so we can update it immediately.

The History of Oktoberfest

Oktoberfest in Germany traditionally starts in the third weekend in September and ends the first Sunday of October.

Crown Prince Ludwig, later to become King Ludwig I, was married to Princess Therese of Saxony-Hildburghausen on 12 October 1810. The citizens of Munich were invited to attend the festivities held on the fields in front of the city gates to celebrate the happy royal event. The fields were renamed Theresienwiese (“Theres’a Fields”) to honor the Crown Princess, although the locals have since abbreviated the name simply to “Wiesn”. Horse races in the presence of the royal family marked the close of the event that was celebrated as a festival for the whole of Bavaria. The decision to repeat the horse races in subsequest years gave rise to the tradition of Oktoberfest.

The Oktoberfest continues in 1811

More and more things to see and do

In the first few decades, the choices of amusements were sparse. In 1818, the first carousel and two swings were set up. Vistitors were able to quench their thirst at small beer stands, which grew rapidly in number. In 1896 the beer stands were replaced by the first beer tents and halls set up by the enterprising landlords with the backing of the breweries. The remainder of the festival site was taken up by a fun-fair. The range of carousels offered was already increasing rapidly in the 1870’s as the fairground trade continued to grow and develop in Germany.

Today, the Oktoberfest in Munich is the largest festival in the world, with an international flavor characteristic of the 20th century.

At the foot of the Bavaria Statue, adjacent to the Huge Oktoberfest grounds there are also carousels, roller coasters and all the spectacular fun for the enjoyment and excitement of visitors of all ages.

The festivities are accompanied by a program of events, including the Grand Entry of the Oktoberfest Landlords and Breweries, the Costume and Riflemen’s Procession, and a concert involving all the brass bands represented at the “Wiesn”.

The Oktoberfest celebrated its 200th Anniversery in 2010, only Wars and cholera epidemics have briefely interrupted the yearly beer celebration.

The second most famous Oktoberfest happens right here in Austin, Texas. We will be celebrating our Oktoberfest here at the German-Texan Heritage Society on 10.08.2022 from 11am – 7pm. Come and enjoy some Gemuetlichkeit, German food and beer as well as live bands.