Beyond the Nest Reviews Geva's REVIVAL: The Resurrection of Son House | Kids Out and About Austin

Beyond the Nest Reviews Geva's REVIVAL: The Resurrection of Son House 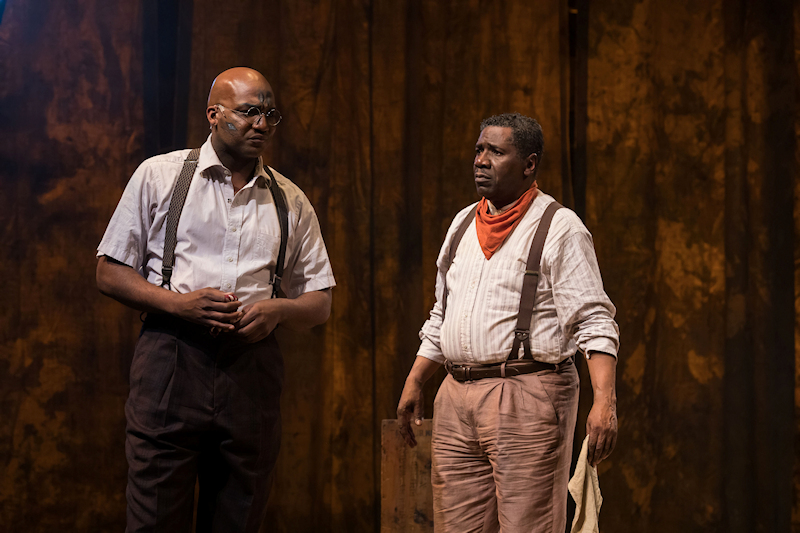 In August 2015, Geva celebrated Delta blues singer and guitarist Eddie “Son" House with a four-day multi-media festival. As part of that festival, Keith Glover had a first reading of his Geva-commissioned play, based on the life of Son, who lived in Rochester between 1943 and when he retired and moved to Detroit around 1974. This production is the World Premiere of the full-length play that emerged during that festival.

REVIVAL The Resurrection of Son House is a richly-stylized production in which a host of angels considers Son’s acceptability for admission to heaven, based on the record of his life and contributions on earth.

As a preacher’s son who later became a preacher and church pastor in his own right, Son House initially considered secular music sinful...until he discovered the steel guitar. This production, which features music by Son House, Billy Thompson, and Keith Glover, throbs with artistry and is belted out by an entire cast drenched in talent, with blues in their souls. Each actor in the ensemble -- Antoine L. Smith, Clifton Oliver, Tyrone L. Robinson, AnnEliza Canning-Skinner, Badia Farha, and Alexis Sims -- portrayed multiple characters, showing off acting, and especially, vocal chops. Between their incredible voices and the soul-penetrating rhythms of the Revival Band (Billy Thompson on guitar, Daniel Kelly II on drums, Fred Vine on Guitar, and Tad Wadhams on bass), you'd be hard-pressed to find better music anywhere, even in the heart of the Mississippi Delta.

Cleavant Derrick’s richly-voiced Son House is a tortured, yet very real and sympathetic character who fell victim to the Great Depression, alcoholism, and his own human weaknesses and foibles. He lurches from job to job, one scrape to another, one city to the next, and his first wife to his second, using his raw music to memorialize the struggles of his life, including his belief that he has succumbed to sin in playing the blues at juke joints.

We follow his life and career up to the point when he is rediscovered in Rochester by blues enthusiasts who encourage him to take up his guitar and career again, thereby further solidifying his legendary reputation as the Delta blues singer who influences such musicians as Robert Johnson, Muddy Waters, B.B. King, Eric Clapton, Bonnie Raitt, and others.

Throughout the play, various characters juxtapose the year being depicted and Son’s age with historic facts about the treatment of African Americans in this country, weaving a framework of the oppression Son faced at that time. Don’t be disconcerted when the timeline meanders a bit.

I keep coming back to the brilliant stylization of this play, from costumes by Loren Shaw and stunning set by David Gallo and Viveca Gardner, to the striking dance and movement by Norwood Pennewell and intricately choreographed fight scenes by Adriano Gotto. The gritty reality of Son House’s life would not have played as well on a stage without the brilliant conceptualization behind this play by Writer/Director Keith Glover.

Whether you are a lover of music and the blues, a history buff, or an aficionado of stylized theatre, the World Premiere of REVIVAL:The Resurrection of Son House is a feast for the senses. It can be seen on Geva's Wilson Stage through June 2.

Carol White Llewellyn is Editor of BeyondTheNest.com and the host and producer of Conversations with Creatives, a cable and online TV program that explores the arts and celebrates artists and their work.