Recommended for the mature 13- or 14-year-old, but definitely for ages 15 and up. 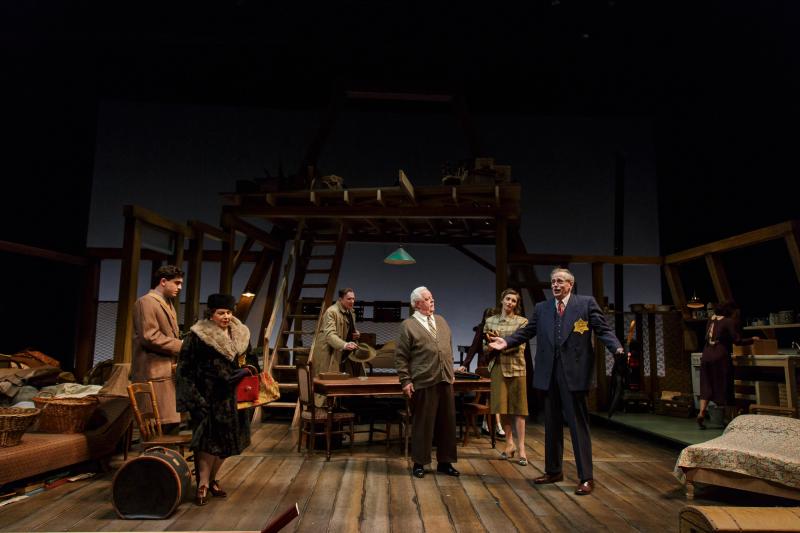 Beyond seeing an exceptional performance by a powerhouse cast, it will give you an opportunity for deeper conversation with your teen, especially in light of today’s divisive social landscape.

We join the Frank family on the day they go into hiding in an attic in Amsterdam, after the Frank’s eldest daughter Margot is called up by the Nazis to serve in a work camp. The designers of the set, lighting, costumes and sound effects have been extremely creative and successful in recreating the claustrophobic environment in which Anne, her family, a dentist and the Van Daans find themselves held hostage by the need to hide from the Nazis.

Teens will identify with the young Anne Frank (portrayed marvelously by Anna Lentz) and Peter Van Daan (skillfully played by Gus Cuddy) as they forge their ways in an uncertain world, from awkward adolescent to thoughtful, more confident young people. Your child will probably also identify with the friction each has with a parent – Anne with her mother, Peter with his father – as they begin staking out their independence.

This play is ripe with thought-provoking moments to inspire deeper discussion, such as when the attic captives share their desires for such modest pleasures as coffee and dancing, or when Anne distributes her personally-customized, hand-crafted Hanukah gifts. Then there’s a pivotal moment when Mr. Van Daan’s stolen crust of bread that threatens his family’s expulsion from safety.

The play is well-paced, with touching, poignant scenes intricately interlaced with the scenes depicting the stress of being forced to live cheek-by-jowl with only one slim bookcase and the loyalty, courage and convictions of a small cadre of friends to protect you from the Nazis.

No matter what your background or family history, Geva Theatre Center’s The Diary of Anne Frank is an important play to see.  Plays, performances, and exhibits such as this one become the watchdog of humanity, guiding us toward our better selves, with the goal of ensuring this evil never comes again. Anne Frank, who was an aspiring writer, would have been delighted to see this stellar performance of her work.

The Diary of Anne Frank is live at Geva Theatre Center’s Wilson Stage through March 18. It is indicated that the play is appropriate for those age 13 and over. I might recommend this play for a mature 13 or 14-year-old, but definitely for age 15 and up. 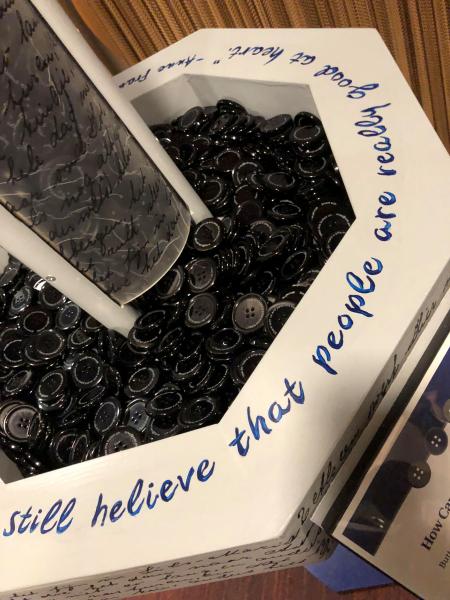 P.S. Geva Theatre Center has done an exceptional job of coordinating an exhibit that gives context to the play. It includes profiles of Jewish émigrés to the U.S., as well as timelines, photos and war-time memorabilia. One of my favorite elements of the exhibit is the display containing buttons that explains that “Buttons, although everyday items, are incredibly powerful. They connect and bind objects together in a simple and gentle way.” The stand in which they rest display Anne’s words, “I still believe people are really good at heart.” It invites attendees to take a button in the hope that they will “similarly connect people in the carrying out of good deeds,” and that the buttons and good deeds will travel around the world. Each individual is invited to share the button’s journey on social media using #AnneFrank@Geva.

Carol White Llewellyn is Editor of Beyond the Nest and an advocate for the Arts. She is also Producer, Host and Editor of a cable and online Arts program, Conversations with Creatives.