kidsActing Studio | Kids Out and About Austin 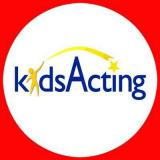 -kidsActing Studio, Austin’s best and most fun place to learn acting, is bringing performing arts to life with full-scale productions and a variety of acting classes for young thespians all across Central Texas.

Established in 1980, kidsActing is Austin’s longest operating performing arts school. It serves over 2,500 students per year. With up to 16 locations, there are lots of classes, camps, and shows from which to choose.

“At kidsActing, we believe in empowering every student by providing a supportive and fun environment where young people can be inspired, creative, and can shine!” explained Dede Clark, Artistic Director. “This fall, we’re so excited about our fun classes. There is sure to be something to keep your young actor in the limelight.”

For Pre-K and Kindergarten students, kidsActing is offering Imagination Friends with musical themes sure to delight. For the older stars, there’s Glee! Song & Dance, featuring hit songs from pop, Broadway, and classic rock. Young musical performers love our Triple Threat classes where kids can sing, dance, act and shine to their favorite musicals!

And, for those looking to hone their acting skills, Actor’s Studio is an in-depth class to learn and apply core acting tools and methods. kidsActing's Adventures in Acting classes bring acting skills and stage combat to your young dramatist, along with a class that aims to delight the inner wizard and magical sports champ.

kidsActing’s full-scale productions are also perfect for young performers. “From auditions all the way to final bows, kidsActing gives kids the experience of starring in a professionally-produced show,” Dede explained. This fall’s productions include the musicals Elf, and Aladdin, as well as the plays Monty Python and the Holy Grail, and Alice in Wonderland.

In addition, kidsActing has a Student Tech program for those who want to work backstage and learn the technical aspects of theatre while running the show.

Dede is also very excited about the newly announced Center Stage Theatre Elite Ensemble and its production of Cabaret. “This group of teen performers (ages 13-19) have a passion and dedication to musical theatre, clearly evidenced by their excellence. They are talented and committed achieving a high standard."

No matter how your young star wants to shine, kidsActing is guaranteed to have the right class or production for them. For a full list of fall classes and productions, visit www.kidsActingStudio.com.